Happy February! Are you getting tired of winter yet? We've got a brand new Case File that will warm things up! We're excited to begin a new month. A new month means new challenges, new sponsors, and new guest designers.

We're so pleased to see folks embracing our new changes. In case you haven't heard, we've got a brand-new twist on our challenge! We're calling it Freestyle, and it's tailor-made for everyone. Like the old, traditional way we've had our challenges? We've still got the traditional clues, which you can find at the bottom. Want to try something new? Freestyle the challenge by interpreting the Case File Scene any way you'd like. Or, combine the traditional with the Freestyle and pick and choose the clues you want. No minimum requirements because CSI is all about inspiration and telling your stories YOUR way.

So, are you ready for the new challenge? Grab you forensics kits, CSI players, and get ready for some serious sleuthing as we open Case File No. 247.

So, when we were looking for a theme for February, we came across Hula in the Coola Day, which is officially celebrated on February 1. According to What the Heck Holidays, Hula in the Coola Day was created because, basically, people in the northern states were getting sick and tired of the crappy cold weather during the winter, and by February, they were ready for some HEAT already! So they decided to buy some hula skirts, toss their coats, mittens, pants, and scarves into a closet for the day, and go outside and do the hula like idiots who are trying to catch pneumonia. They thought that, if they tried hard enough, they could simply forget about the cold weather and trick themselves into thinking it was the nice, hot summer. (Apparently, accomplishing this means having to go outside in nothing but a grass skirt and some coconut shells and dancing.)

And if you're not interested in freezing in a hula skirt, go grab an umbrella drink and head to your scrap room!

We've got a delightful Scene, found on Pinterest, to take you away to a tropical island! Feel free to interpret the Case File in any way that inspires you, or for our traditional clues, scroll down to the bottom of this post. 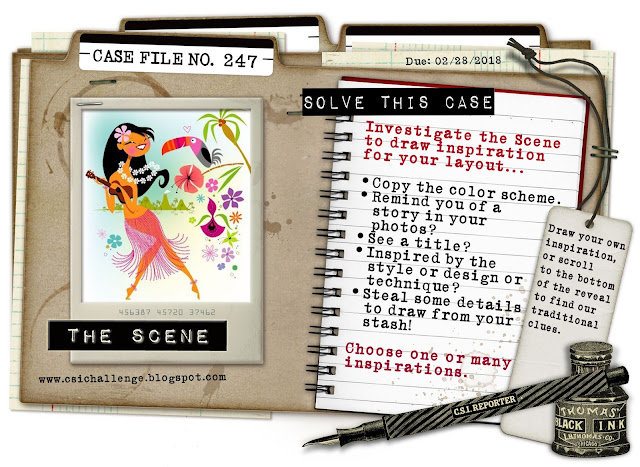 Remember to scroll all the way down to the bottom of this reveal post for RGB codes, color descriptions, and more detailed explanations of the Evidence and Testimony prompts. 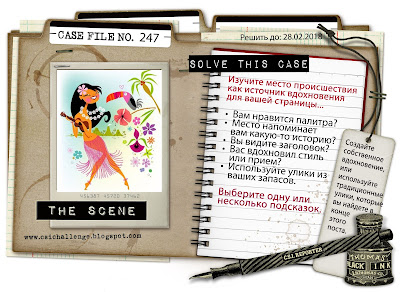 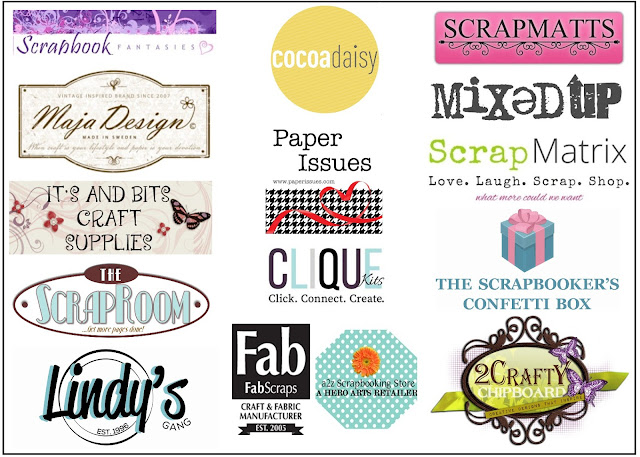 We're honored to have the members of several of our sponsors' design teams serving as Guest Detectives this month! Joining us are the teams from 2Crafty, Clique Kits, Its and Bits Crafts Supplies, and Paper Issues, so we'll have tons of inspiration for you!


How Hina solved the Case File: I drew inspiration from the color scheme and the overall picture that instantly brought vacations to my mind.


How Tammy solved the Case File: I took inspiration from the colours (in face even the way they were lined up). Evidence - I used a white background, I included florals, leaves, bird (flamingo) and rub ons (haven't used these in years so thanks for the reason to!).  Testimony - I documented a summer memory and also used rhyming words in my title.

The designers from Clique Kits did an amazing job solving the case too:

Merrilyn, our Guest Detective from It's and Bits masterfully solved the case: 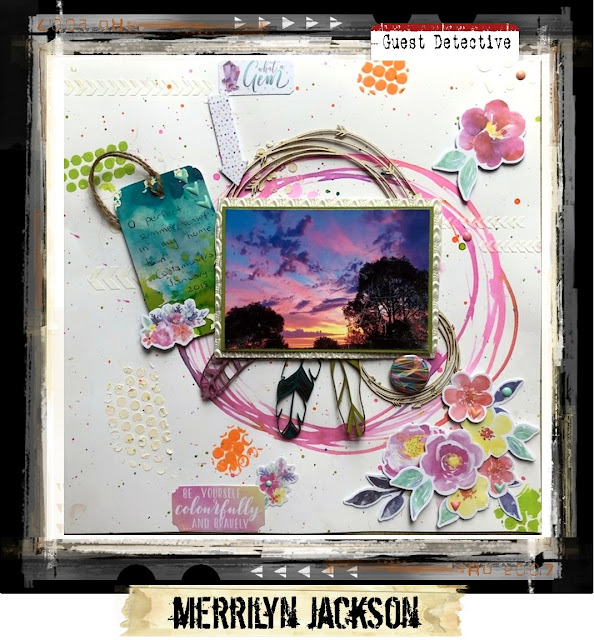 Here is how the CSI Detectives have expertly cracked the case. You can read more about how the Case File inspired them on their blogs. 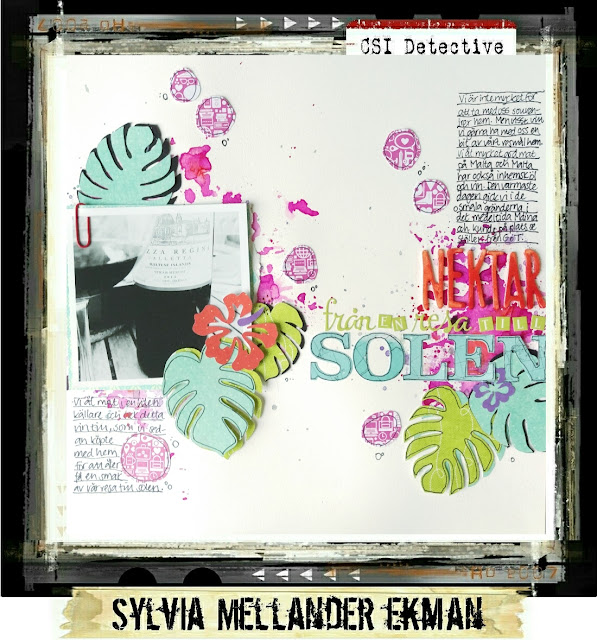 How Sylvia solved the Case File: I used the traditional case clues only drew some more hues from the scene, challenging myself to add the purple.  I used mixed media, flowers (mind you), leaves. My journalling is from a summer memory travelling to Malta. 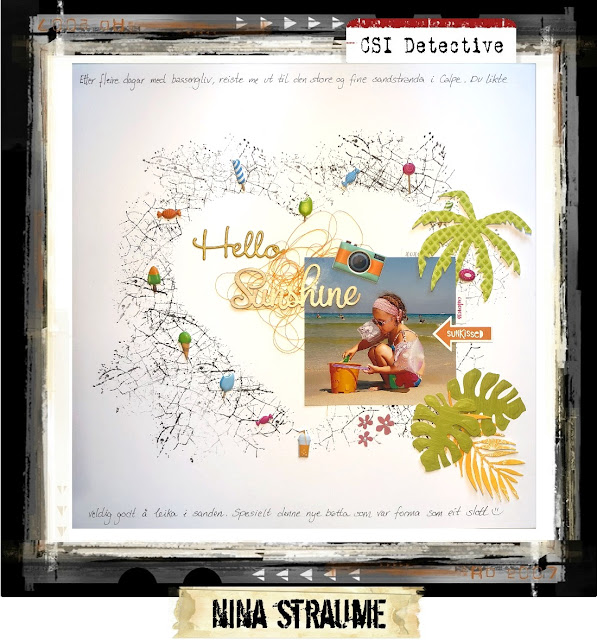 How Nina solved the Case File: I was inspired by the colorful picture in the challenge. It reminded me of summer and vacation, and I used a photo I took at a beach in Spain some years ago. 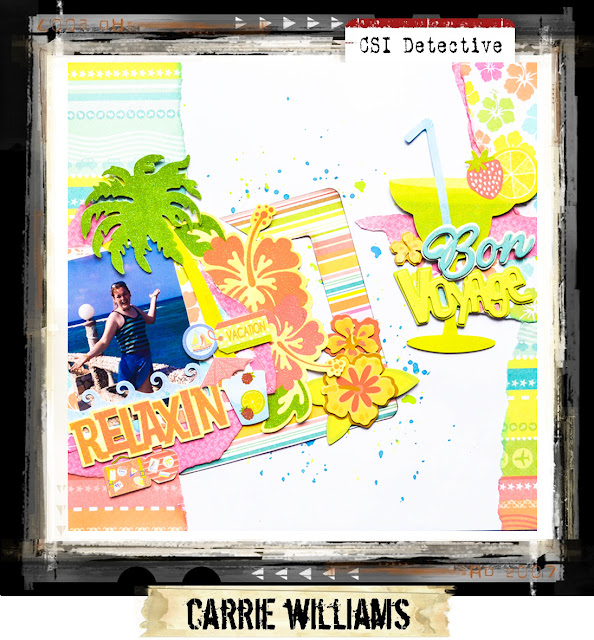 How Carrie solved the Case File: I was inspired by the tropical vibe of this case file. From the traditional case file I used the color scheme, a solid white background, floral pattern, mixed media background, flowers and trees. 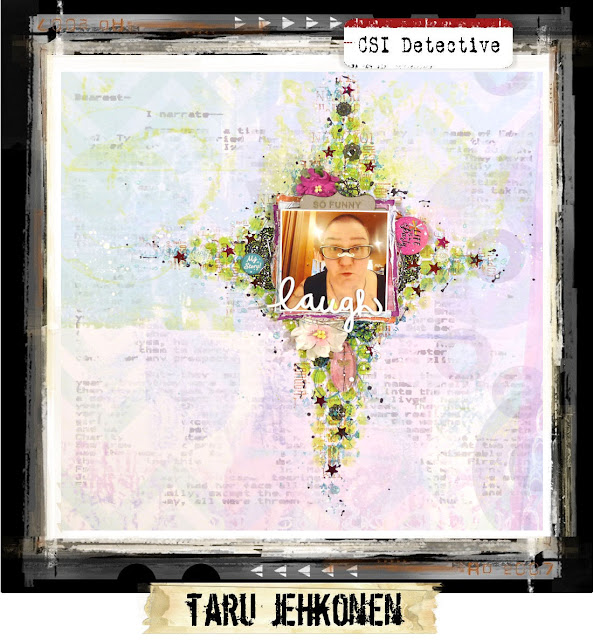 How Taru solved the Case File: I made this with traditional way!

How Carina solved the Case File: I was inspired by the tropical vibes and the bright colors. It made me think of the plans my hubby and I have about going on a Carribean cruise one day. 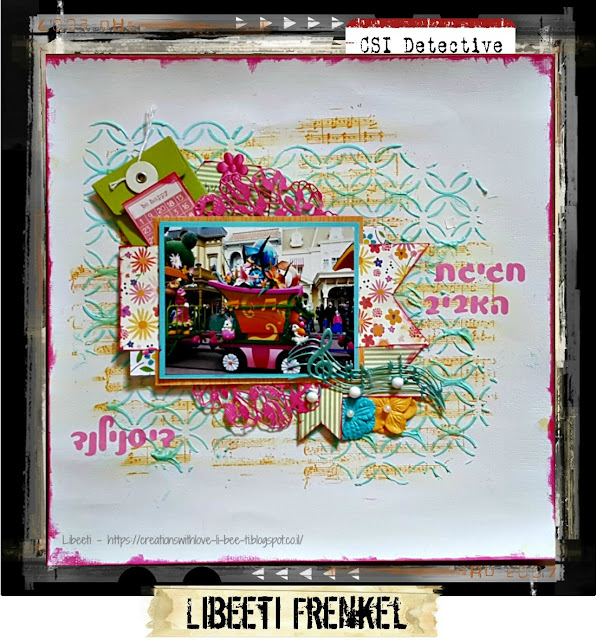 How Libeeti solved the Case File: I followed the traditional way, using solid white cs, mixed media background, flowers, floral patterns and musical elements. I've added flowers to my hidden journaling tag. The photo was taken on our journey to Disneyland Paris, and it's about the Spring Celebration parade. 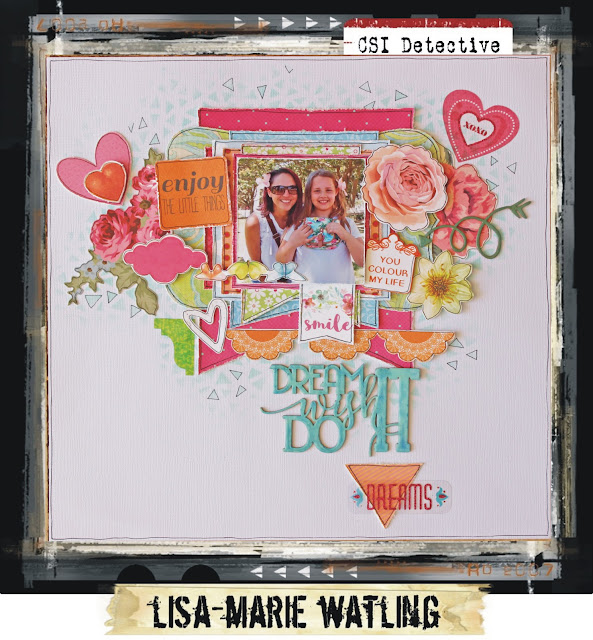 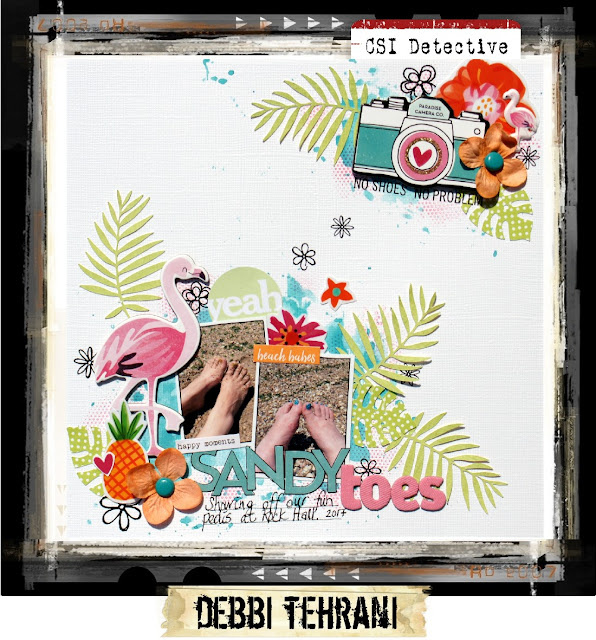 How Debbi solved the Case File: Last summer I bought a whole bunch of flamingos for some reason, and I knew I had to use one--or two for this Case File. I used the traditional clues from the Case File...Evidence: solid white background, mixed media background, flowers, hearts, leaves, birds, something fringy, and rub-ons. Testimony: Document a summer memory. Scheme - all 5 colors. 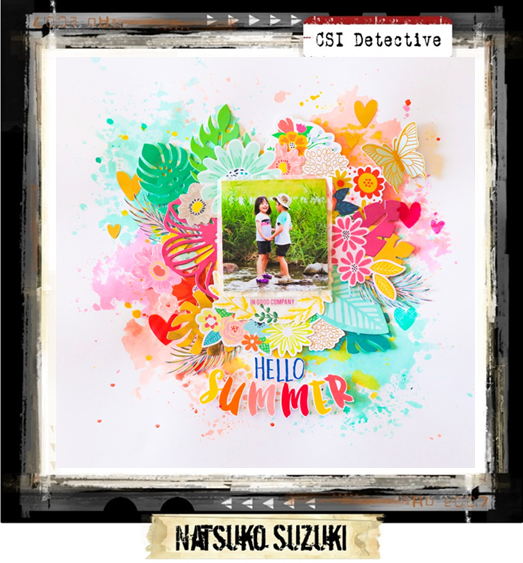 How Natsuko solved the Case File: I followed the color scheme this month, and for the evidence, I used a solid white background, mixed media and flowers. I LOVE summer layouts

How Jacynthe solved the Case File: I was inspired by the summery scene, in the middle of our Canadian winter, to scrapbook these funny photos of my almost 3yr old grand-daughter. She seems confused as to which season it is :-). I have used all the colours, as accents rather than the main colours; floral pattern, flowers, hearts, leaves, and something fringy. Inspiration word - laugh. 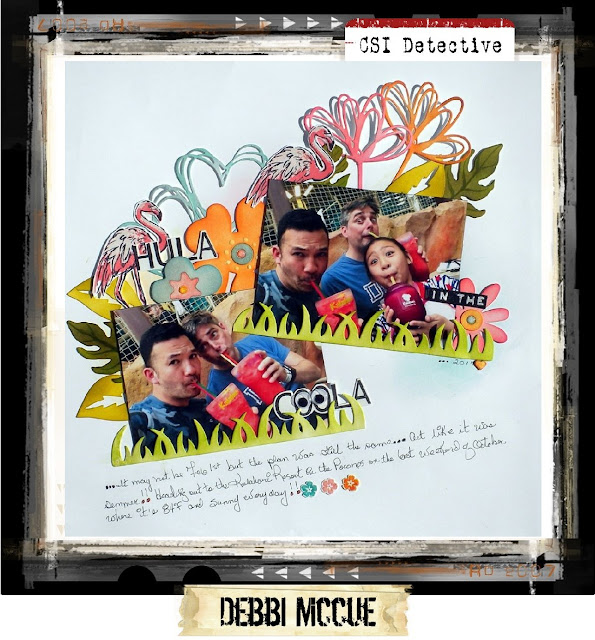 How Debbi solved the Case File: I was completely inspired by the title and colour palette with this challenge.. had some super photos that were perfect for this layout..!!

How Kim solved the Case File: I went the traditional route and used the case colors and the evidence. 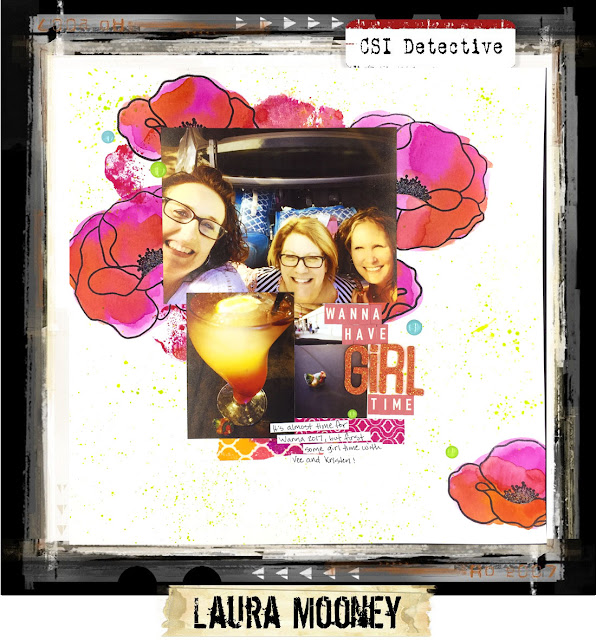 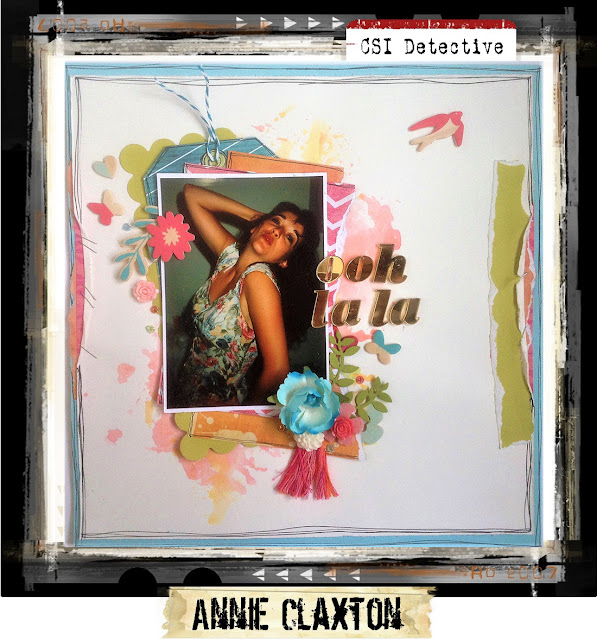 How Annie solved the Case File: I loved this fun summery Case File and was inspired to document a memory of a summer holiday many years ago. I used several items from the Evidence list - starting with a solid white background, adding some mixed media, using all those lovely bright colours, adding some flowers, leaves, hearts, a little bird and a home-made tassel. 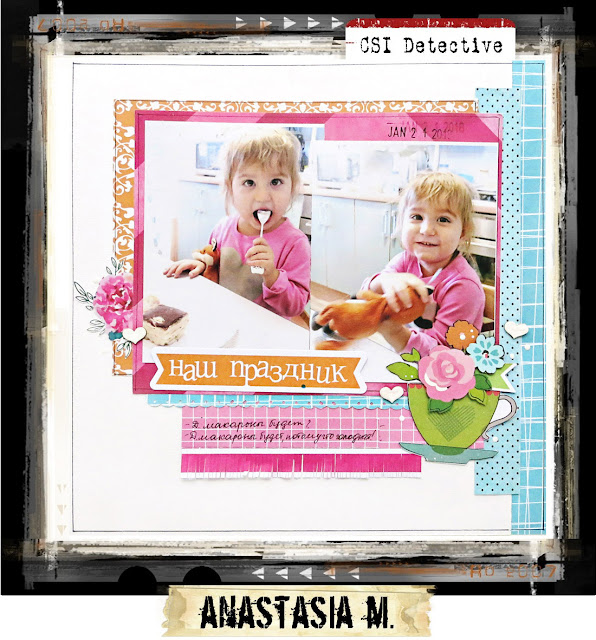 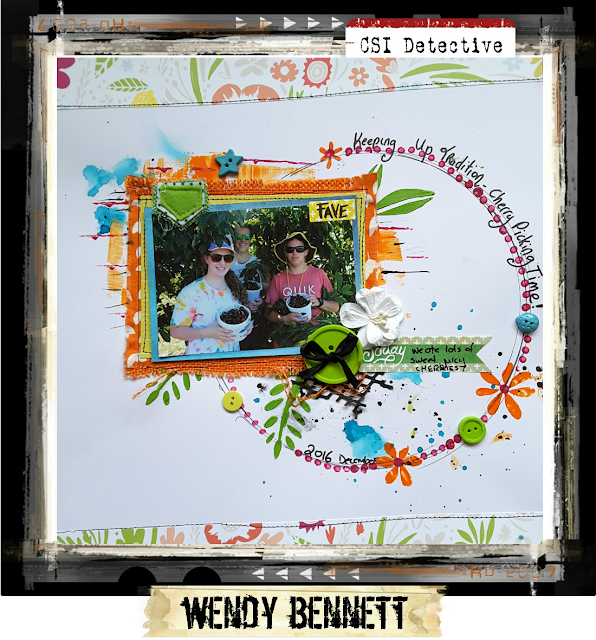 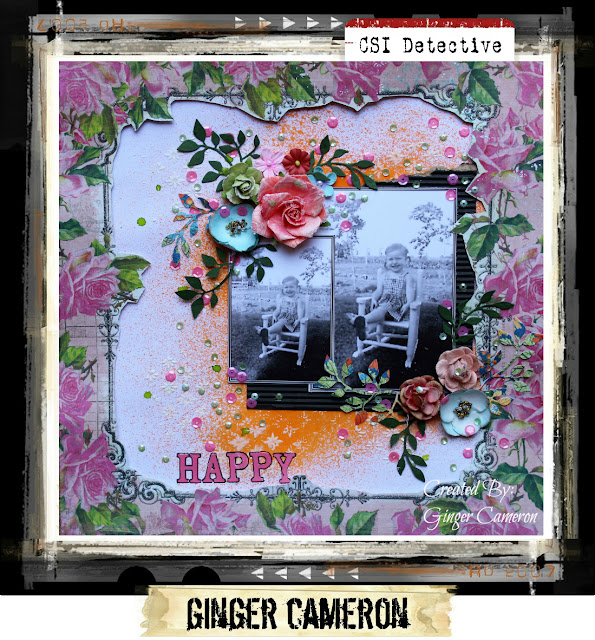 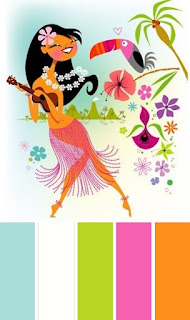 
The deadline for completing this Case File is Wednesday, February 28, at 11:59 p.m. EST. Be sure to link your layout using the link tool in the sidebar, and mention the Evidence and Testimony clues you used. Also, please title your link with your name and country.
Posted by Debbi Tehrani at 5:00 AM 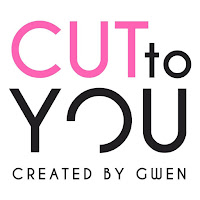 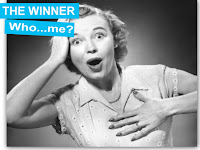